What music brought joy to Mom?What were Mom’s favourite songs, and who were her favourite singers? A daughter can’t always know that, as every one of us has songs with meanings we hold only in our own heart. As for the songs and singers I do recall, well let that be another Top Ten (non-ranked) List:

One. Don Williams. Anything by Don Williams. The Gentle Giant, as he was called, possessed a truly remarkable voice, a deeply reassuring bass-baritone that he employed to create a sense of intimate conversation. He was the friend you could count on, who was just sharing the truth. Like Mom, he came across plainspoken and frank, and put out songs that extolled a virtuous, humble lifeway. For her funeral, we played Lord, I Hope This Day is Good; my sister recalled coming home from work to find Mom in the living room, rocking in her green chair and singing along to Don Williams, giving voice to her plaintive hopes, singing to connect to the divine rhythm and find the day good, however the Almighty had dished it out.

Two. Mario Lanza. She would say he was a favourite singer, and I do remember this album: 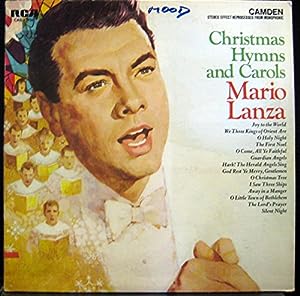 In later years, I found a Lanza biography in a thrift store, which I read before passing it along to her. And then, all I could think was, do I really want to send her this? After all, his life was revealed as fraught with addictions and conflict. Mom could be a bit defensive, and I couldn’t be sure she’d not take it into her head that I was sending this to poke fun at her fandom, gloating over her idol’s clay feet. (Really? From whom did she suppose I’d learned to roll one eye at autograph-hunting and the like forms of adulation).

Three. Freddy Fender.  His records were often on in the living room, and all of us would sing along, faking the Spanish bits, cushions on our heads as sombreros, hamming it up. As for me, it was a defensive ham, of which a shred or two remains, because if I listen to him straight, Freddy can make me cry in an instant, whatever my actual mood. Like Mom, I find something irresistible in Freddy’s warble.If I’m honest, he sounds a bit like my dad.

Four. As for Dad, he was a musician, who made part of his living playing in dance bands. She would go to those gigs, and spoke of taking my eldest sister along in her baby days. Later, we’d have babysitters. Later still, the whole family would pile into the crew cab or the panel van, and drive to the country dance halls, to join other families dancing and sharing potluck. We kids ran everywhere, inside and out. As teens, we’d sneak out to the cars to share the profoundly serious talk of teens, wide-eyed about who else was out there, not talking, but doing other things… Mom, a teetotaller, was nevertheless always a stalwart at hall dances, serving, organising, acknowledging now and then, with a little smile, that yes, that was her husband there, his fingers flying on the guitar, always impeccably in time, playing for the dancers.

Five. Too Young. Mom was 25, Dad 27 when they married. Dad, on peacekeeping duty in Egypt, bought her two photo albums. One was bound in camel hide. The other, in which their wedding photos went, was wooden, with an inlayed map of the Nile picked out in gilt, and a music box set in the spine. When opened, it’s glockenspiel picked out the melody made famous by Nat King Cole.

As a child, I felt slightly worried about the stigma of having a mom who left it so late, when country life was full of examples of moms married at 18 or so. When, at 22, I moved to Mexico to work, I recall colleagues telling me confidently that, if a woman doesn’t marry by 23, she never will. Life being the ironic beast it is, I would only say my wedding vows formally at the age of 49. Not too young at all.

Six. Nat King Cole, ah, there was another lovely singer she liked. How could you not? I remember finding out about the old Eastern Canadian brand of tea, King Cole, and asking her. No, as far as she knew, there was no connection.

Seven. Bobby Vinton. With Bobby, the connection was family. Living in the context of Canada, the racism pointed at us for being a mixed family was mostly aimed at Dad being openly Ojibway (yes, his dad was Mi’gmaq, but died very young, and Dad grew up in his mother’s culture). Mom and Dad were urged to pretend he was French. I’ll forever be proud that they refused point-blank, and vocally, and made sure it was a family story all their children knew. It mattered to claim our Indigeneity.  Although Mom and Dad insisted we all learn how to proper greetings and polite phrases of Polish, to use at Grandma’s house, our Polishness did not require such heavy lifting, and our estrangement from that side of the family pushed it farther away as we grew older.  I wonder now how much it might have meant to Mom, when Bobby Vinton became a star. His TV show was always on in our house; and then, we kids would polka, belting out his theme song: Oh, oh, Moja Droga Ja Cie Kocham! Means that I Loooove you so! We’d bellow, careening wildly around the livingroom.

It was the theme song of his variety show, closing every night. I recall there being a clownish female character in traditional Polish dress, who’d dance a bouffant polka, by way of embracing/acknowledging that Dumb Polack stereotype that so prevailed in North American popular culture. I can’t – and it’s not a great loss – find video evidence anymore, but Bobby’s sweet, true voice lives on.

I loved learning, a few years ago, about how Bobby Vinton vetoed a Statue in his honour, saying that, in his opinion, the money could and should be spent addressing real needs in the world.

It’s not for nothing that they called him The Polish Prince. And, despite starting out to list ten singers/songs Mom loved, it is fitting to stop and let Bobby, a man who kept his eye on what mattered, whose stand resonates with so many decisions Mom made in life, close this show out. Kocham cię w sałym sercem. Love you with all my heart.

*This year, I am honouring my mom’s passing by writing throughout the Advent season, following as prompts the daily quotations cited in the free online calendar put out by the Catholic Medical Mission Board Mom was a lifelong Roman Catholic, and I was raised with the Church as a contentious part of our family life, given that my Ojibwe dad’s family was so affected by the church. Nonetheless, her faith was important to Mom, so this is a tribute to her. It’s also a reflection on how religions influence in many ways.

If you like these posts, please also consider donating, in the memory of Albina Sewell, to Stollery Children’s Hospital in Edmonton; her chosen charity for memorials is not religiously affiliated, but serves all children.