Today is Aboriginal Veterans’ Day in Canada. I suppose this is a necessary part of the process of Truth and Reconciliation for our nation, but I find it an ambivalent undertaking.

It’s necessary, because so many Aboriginal men, and women, served in Canada’s Armed Forces despite their civilian status placing them in a position of exclusion, poverty and discrimination. First Nations people could not vote before 1960. They could and did serve.

All veterans live with ambivalence, owing to the fact that Canada’s military deployments are generally overseas, in other nations. The case is made that, by fighting over there, soldiers keep safe those at home. ‘We owe them our freedom,’ is the November refrain.

The rest of the year, the questions remain, as to whether we are exporting freedom or upholding colonial empire. Sometimes, in some places, the answer is clear one way or another. And that’s not for me to judge, and judging that is not the intent of this piece.

This I know: My dad joined the army at 17. He’d been raised non-Status, his Mi’gmaq father died young. He went to Church-run day schools, and left at age 12, walked into the bush with his dog to work at a logging camp run by his uncles.

Dad was a proud Ojibwe man. He hung the 1800s Treaty Gun he’d inherited on the wall above his 30/30. And he was proud to join the army, it meant he could be a man, make his mother proud, and gain the means to start his own family. He served in the UN Peacekeeping Forces in Egypt, Cyprus and Korea. He taught gunnery, as a Staff Sergeant, and carried the lessons of his army life on into civilian and family life, for better and for worse.

For better, he knew how to teach: when I was 3, my sibs and I almost burnt down our house. Dad, ex-Army, was away at work. We had coal oil lamps. While Mom was out milking the cow, we played a fascinating new game, based on the TV show we’d seen at Grandma’s (no TV in our backcountry house). We were the Jetsons, leaping from bed to bed, shrieking with joy as our shadows grew and shrank, just like George and Jane going through their shrinking machine. Fun, until someone slipped, and a lamp toppled onto a bed.

We went into action, as Dad had drilled us, because fire is always a risk in a wood house with a wood stove and coal oil lamps, even without Jetson-induced japes. Big Sister ran and wrapped up Baby Sister and took her outside. Big Brother seized a heavy quilt and smothered the flame. Me, I ran down through the dark to the barn to get Mom.

As I recall, Mom and Dad were too proud of our emergency response to punish us for our carelessness, though of course they made it clear that we should take to heart that we must never be so careless again.

For worse, he lived with what today might be diagnosed as PTSD. It affected all of us.

Here are some of the photos he chose to keep. These people would also carry scars affecting their families and communities. They’re part of the reason he didn’t glorify war. 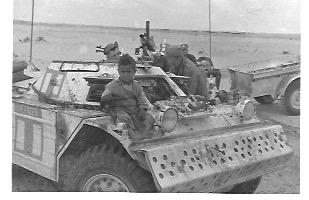 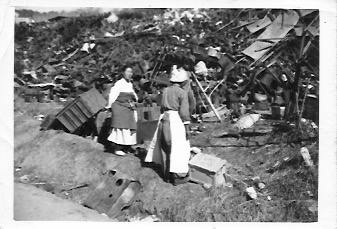 I do know that, today and on Remembrance Day, I’ll sift through pictures and memories and keep on in the work of living with the legacy of his life as a soldier.

To all Veterans, and all veterans families, all over the world, may we find ever more peaceful and just ways of living together in this world of wonders.